What Are World's Strangest Beauty Pageants?

Susan Hayes answered
Beauty is in the eye of the beholder, or so they say. If that is true, then these contests indicate that some peoples’ eye for beauty is nearsighted and cross-eyed. Be warned, some of these may cause an overwhelming desire to pluck out your eyes and run them through the sanitize cycle on your dishwasher. 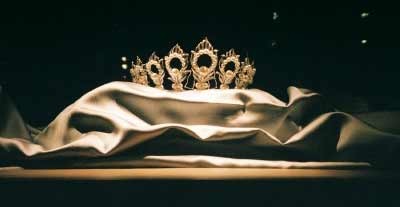 Their parents and their plastic surgeons are so very, very proud of them.If you are ever in Las Vegas in July, and for some inexplicable reason have free time not being taken up with drinking, gambling and partaking of the other deadly sins, then you can make your way down to the Riviera Hotel. Once there you can check out what might be the most flamboyant pageant in the world. This is the home of the first World’s Most Beautiful Transsexual Contest, open only to transwomen. Contestants may be pre or post operative, but must be able to provide proof they were born men.

Waxed, teased, primped, plumped and in some cases taped down, all the “girls” appear as a celebrity and compete in all the beauty pageant classic displays; swimsuit, evening gown, interview and talent review. A full length documentary titled “Trantasia” was filmed in 2004, covering the first competition.

Oh Canada, where are your clothes?They say you can’t judge a book by its cover, and the ladies of Miss Nude Canada have taken this saying to heart. During their 20 minute stage performance, each of them shed their clothing, letting the judges and audience get a good gander at the assets Mother Nature gave them.

The largest “Miss Nude” competition in the world is touted as a “unique mix of rookies and pros” and is all about taking it off. Any woman can enter once she’s reached legal age, and all that is required is a marked lack of modesty and a healthy dose of self confidence. 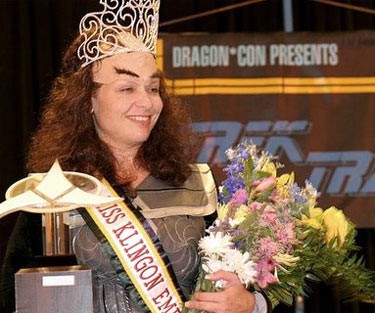 Trekkies, meet your new pinup girl For over a decade a small but devoted group of fans have been giving the geeks of the world nerdgasms by donning leather outfits and gluing latex ridges to their foreheads. They gather at DragonCon in Atlanta, Georgia to compete for the title of Miss Klingon Empire.

Demonstrating such talents as reciting Klingon love poetry and attempting to sing Klingon Opera, these Bat’leth wielding warriors strive to epitomize what it truly means to be a member of the entirely fictional and oh so very violent Klingon race. In at least one case, a fight broke out amongst the contestants as they strove to prove their worth. 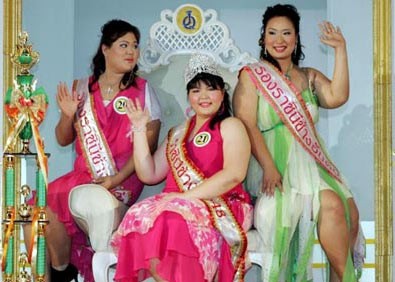 In Thailand bigger is better, at least when it comes to this beauty pageant. The event is hosted at the Samphran Elephant Ground and Zoo, and it is run to raise awareness and money for elephant conservation. Yes, elephant conservation and heavy set women with something to prove. If you added in the words vegan somewhere it would sound more like a PETA protest than a pageant.

The women are judged on their physical appearance, interview answers and overall performance, as well as how well they exhibit the finer qualities of an elephant. These qualities are not defined, but one can assume the desired attitude is neither a fear of mice nor an overwhelming love of peanuts.

The minimum weight for entry is 176 pounds, and there is an additional prize given to the contestant who tips the scales with the largest weight. 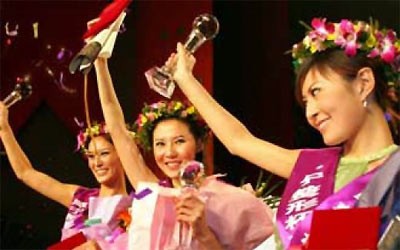 For those born as ugly as an Uruk-hai but with riches enough to buy what Mother Nature denied them, China presented the world with the Miss Artificial Beauty Contest. Only run once, this pageant was created after a contestant was disqualified from another pageant for having gone under the knife.

Every stunning contestant must provide a doctor’s certificate verifying they have been artificially altered or enhanced by a plastic surgeon. The 2004 winner was Feng Qian, a pretty piece of surgical sculpture from north east China.

Feng Quian beat out a transsexual, who proved the judges had a sense of humour when she was awarded the winning vote in the category of “Biggest Change”. 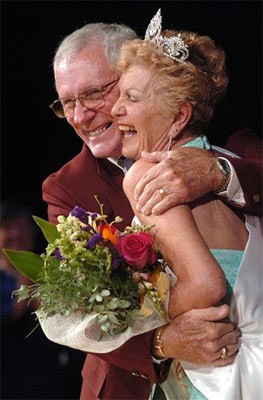 Being over the hill is looking pretty glamorous, at least for the ladies who compete in the Ms Senior Sweetheart pageant. What started out as a Lion’s Club fund raiser full of elderly eye candy is now a national event with plans to go international in the near future.

Women over 58 years of age compete in the two day pageant and are judged on interviews, talents and an evening gown promenade. Wheelchairs and walkers are permitted. The only thing missing from the standard pageant repertoire is the swimsuit competition, and I can’t say I blame them for the omission. 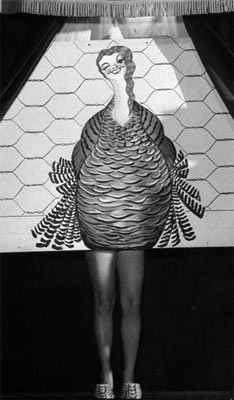 Miss Drumsticks 1953. Note the lovely plumage.Every year at the Turkey Trot Festival in Arkansas, women aged 16-24 are invited to strut their stuff for the coveted title of Miss Drumsticks. Contestants are judged solely on their legs and the rules clearly state they are all to be garbed in a one-piece swimsuit and clear or taupe coloured high heel shoes. Pantyhose are forbidden, ensuring no one gets a leg up on the competition.

For those who pluck up the courage, the contest requires they hide behind a large picture of a turkey with only their legs visible. This ensures the judges are focused on the right body bit while making the pageant photos some of the funniest ever seen.

Past winners have enjoyed flights to LA or New York, ironic considering the turkey is a flightless bird. 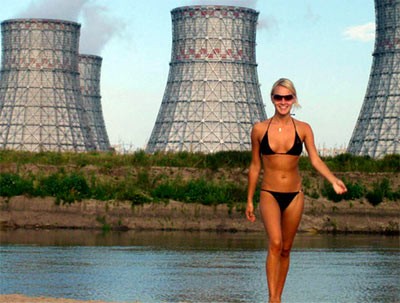 If she goes swimming in that water, her next pageant will be Miss MutationEvery spring, Russian’s nuclear industry goes into a very different sort of meltdown as they start looking for the next “Miss Atom”. Competition is limited to women who work in the nuclear field and who are between the ages of 18-35.

Hotter than a uranium rod, this pageant is unlike most others as it is done purely online. Votes are cast from anyone willing to sign up and hand over your email address and password to the Russian government. The winner is offered a luxury trip for two to Italy. 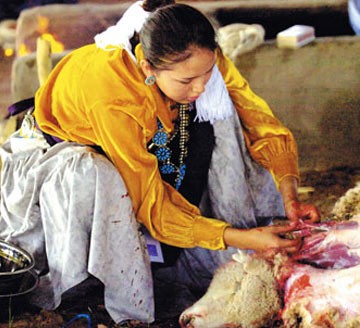 Miss Navajo Nation is chosen each year to represent the characteristics of a true Navajo woman. Her job is to act as a goodwill ambassador and a role model for her people.

For over fifty years the women have competed in a pageant unlike any other, displaying skills vital to their people’s traditional daily life. No, these skills do not include code talking or anything related to Nicolas Cage, though I imagine that would be an interesting addition. These skills include fry bread making, rug weaving and the butchering of a sheep. Pause for a moment and try to imagine any Miss Universe in history having sheep slaughtering as part of their act. It sure would beat watching yet another beauty queen tap dance or baton twirl. 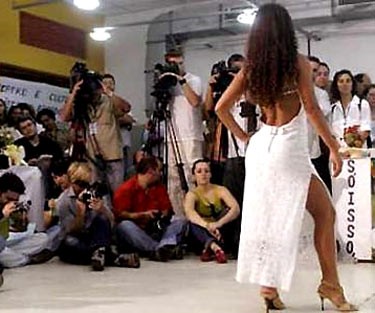 Doing time in prison is supposed to be hard, but there is a thin line between hard time and crazy making time. In an effort to ensure their involuntary guests did not go off the deep end, Brazil’s Federal Police began hosting a beauty pageant in 2008.

Decked out in clothing donated by a local store, the contestants sashay across the mess hall floor in evening attire and beachwear. A far cry from the standard issue orange jumpsuit that seems to be fashionable in most prisons these days.

The guards report the contest is good for morale, and the entire prison’s behaviour improved because the inmates know that fighting or getting caught doing any of the things that got them incarcerated in the first place would mean instant elimination from the contest. And why are the girls so eager to be involved? The Queen receives a cash prize stashed safely in a bank account until her release, and even more valuable; a career training course for getting herself back on her feet.

Lee Jay answered
World's Most Beautiful Transexual is AWESOME!!!  Now if you put in Miss World, now that is one strange beauty pageant.

Samantha Quigley answered
All of them!